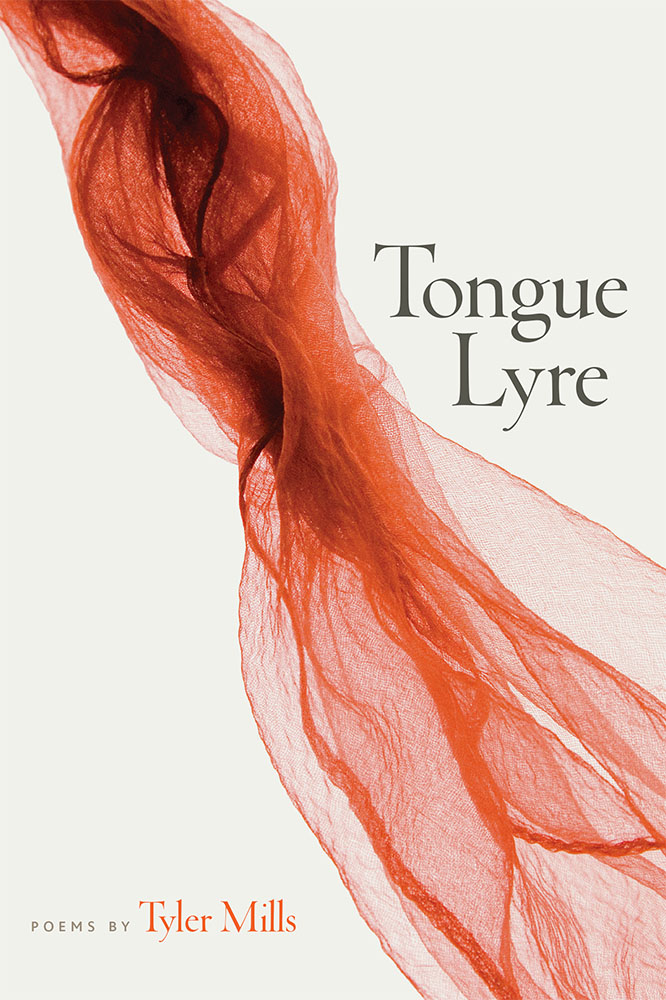 “Taken as a collection, Tongue Lyre weaves a new mythology for our contemporary lives, one based in ancient story but resonating with contemporary problems and settings, with continued attention to voice, body, violence, and song. This is an exciting, imaginative, lyrically charged debut.” -in American Book Review, reviewed by Andrea Scarpino

“Mills uses myth to peel back the illusion of safety that ‘reality’ offers us—and with it the illusion that there is a barrier between myth and real life. Myth is not a story or a set of stories here; it is a force that makes and unmakes, continually and throughout Tongue Lyre.” – in Rattle, reviewed by Lucy Biederman

“Tyler Mills’ “Tongue Lyre” is a book full of large poems—sweeping lines and full pages, yes, but these poems contain worlds, the beginnings of myths (and sometimes the endings), a hundred years of building, pink-skied love affairs, and, as the title suggests, music. It’s not only embraced by the language on each page and in the bodies of the violins being built and played, but it’s also in those myths—continually mined out of the earth and lingering throughout each of these poems like a haunting, unforgotten refrain.” – in Rufous City Review, reviewed by Anna Rose Welch

“To create shelter, for the lyric body, the exiled body, or roving language itself, is a vocation and art, whether of survival or salvation; it is to sing the body electric, to awaken the creatures of labor, or displacement, and dignify their lives.” – in Tupelo Quarterly, reviewed by Virginia Konchan

“There is an aural intelligence in Tongue Lyre that tests its lines as if they were part of an  instrument, which, indeed, they are. It is no accident that much of the matter in Tyler Mills’ poems  involves the subject of music—honoring it, evoking it, making it. But the poet’s vocal skills are easily  matched by her rich visual brilliance—in so many ways Mills’ poetry is the example of how the imagination becomes a narrative less told than sung.”   —Stanley Plumly

“In fractured lyrics, Tongue Lyre circles an absence, an epicenter, a wound. Through the sensibility  of a postmodern Philomela, the nature of unspeakable trauma is simultaneously interrogated,  evaded, and—ultimately—recovered and given voice to in artifactual narrative fragments and  shards. Palimpsest with myth and dangerous memory, Tongue Lyre is part tapestry, part song—  unutterably powerful in its fierce reclamation of music and broken beauty out of flames, collapse,  shattering, violence, disaster. Moving with an assured, tumbling associational momentum and  flecked with scalpel-chiseled images, virtuoso passagework, these poems will thread their way  through your head like a piercing silvered needlework where they will linger. And sing.”   —Lee Ann  Roripaugh, Author of On the Cusp of a Dangerous Year

“From violins to ossuaries, Tongue Lyre is a lovely debut humming with the gift of a lyric ear. Tyler  Mills composes a musical odyssey of the human soul where ‘flames ice the grass.’ Whether riding a  bicycle ‘the length of an island,’ cleaning a lyre with rice, or caring for ‘a child / found in an empty factory,’ Mills wisely reminds us that ‘when language fails, there is sound.’ A beautiful collection, refreshing in its allusive and tonal valences.”   —Karen An-hwei Lee, Author of Phyla of Joy

The Atlantic: “Poets on Their Favorite Love Poems”